Ian Fennelly often displays his work on the Urban Sketchers’ website. One piece of work prompted me to comment that he had transposed a complex architectural setting into a vibrant scene. I asked if he could explain the thought processes used to develop his work. What creative process did he apply, go through or whatever to produce his style? A difficult question I know.

I suspect that the process of creativity differs from person to person. I write, I carve, I cartoon all of which are creative processes but ones which I have difficulty in explaining. My cartooning does not have the technical complexity that exists in Ian’s work. His use of shapes, slight distortion, richness and choice of colouring impress me, and I want to understand the driving forces behind them.

Ian very kindly responded and suggested that I join him on location where he would attempt to explain his approach. In the mean time I thought it would be useful to try and analyse his approach.

One statement I made earlier was the use of shapes and slight distortion in his work. So, I thought that would be a starting point. 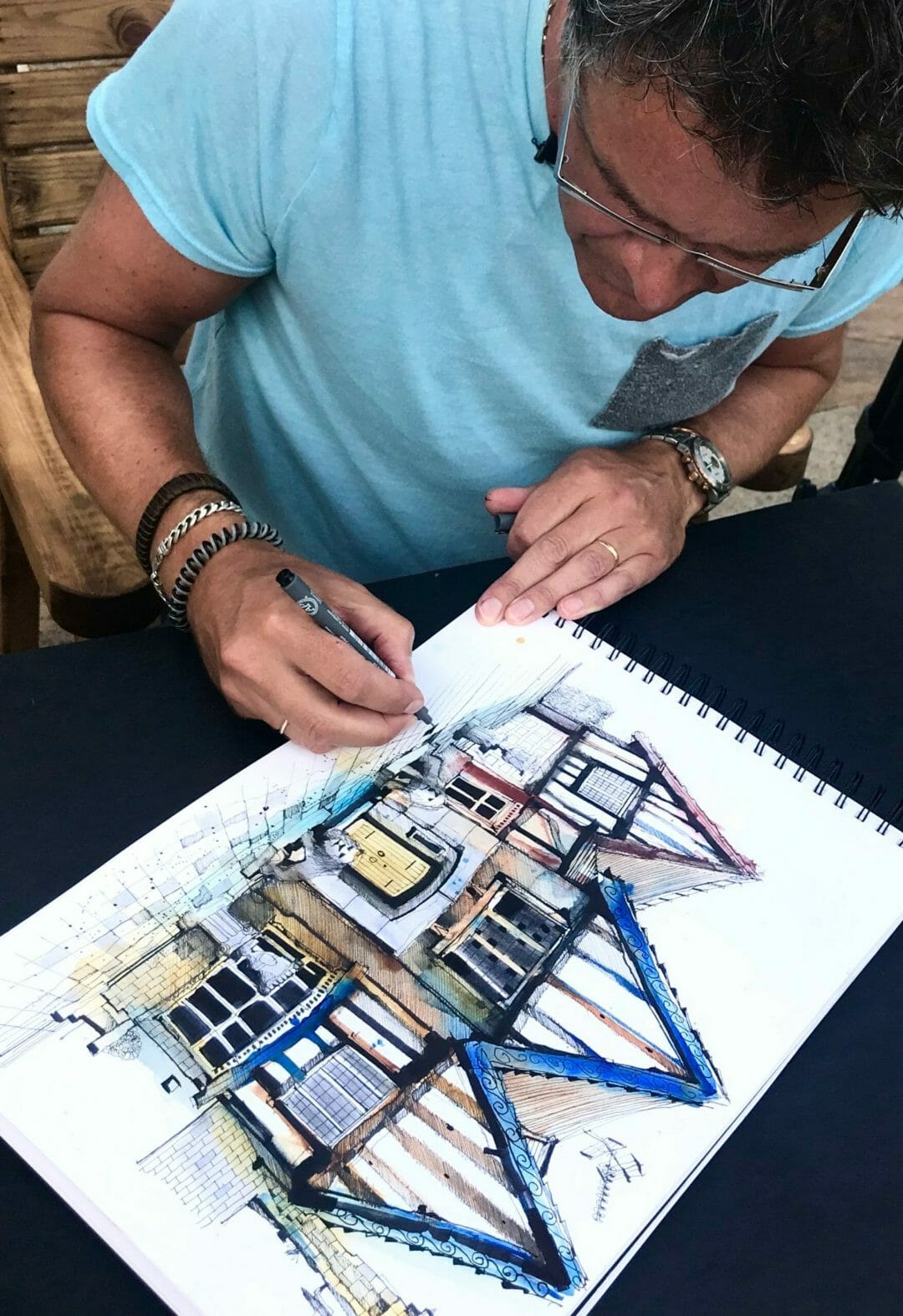 I have not received any formal art training; I’m totally self-taught–for better or worse. I was an aeronautical engineer. My training led me to study and analyse engineering problems. In retirement I am a Science, Technology, Engineering and Mathematics (STEM) ambassador where I develop ways and means of enabling students to understand the nuances of engineering design. To do so I analyse and dissect a system to identify things that include objectives, functions, forms and shapes, materials, performance and limits. I’m applying the same analytical approach in my attempt to understand how Ian develops his works of art. 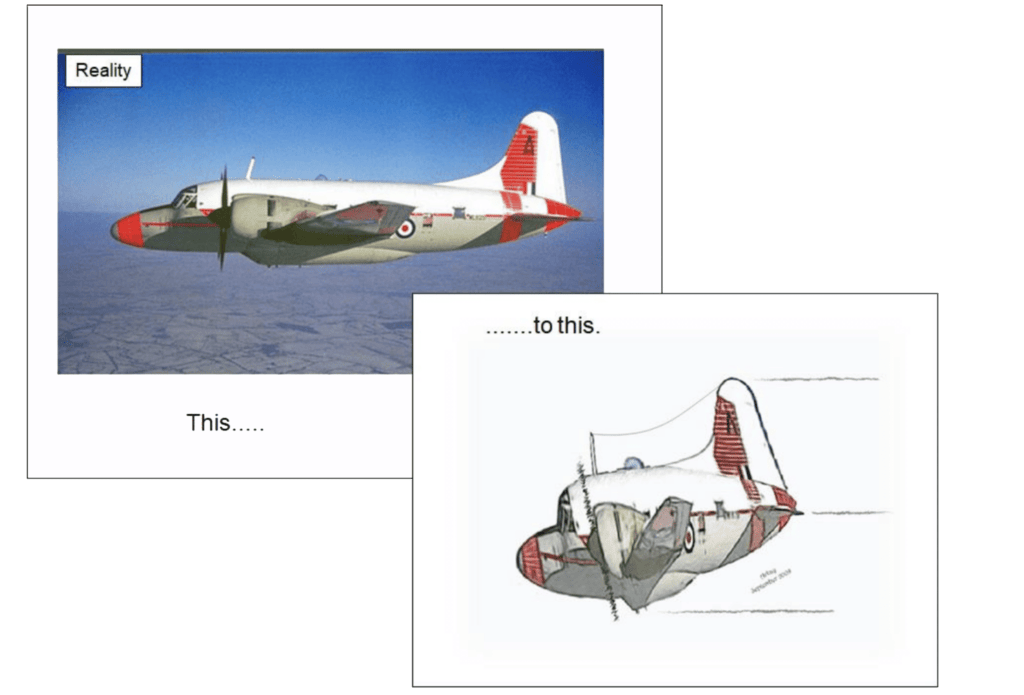 My comfort zone is cartooning where I take a situation and try and portray it with whimsical and gentle humour. To develop a humorous character, I distort features such as shape, posture and action. I also try to simplify and exaggerate a character, object or a scene.

I served for 33 years in the Royal Air Force, as a maintenance technician, aircrew and finally as an Engineering Officer. I did my aircrew training in a Vickers Varsity aircraft. Figure 1 gives a photo of a real Vickers Varsity and a cartoon portrayal. One can imagine trainee aircrew inside the aircraft concentrating on trying to get things right. The Varsity itself shows a cheeky, tolerant and nonchalant air that suggests it’s been there and seen all manner of trainee aircrew efforts.

Distortion and exaggeration have been applied to develop the cartoon version. The aircraft has been shortened and given a very tubby appearance. Embellishments have been added in the form of motion lines and a blurred format of the propeller to portray movement. 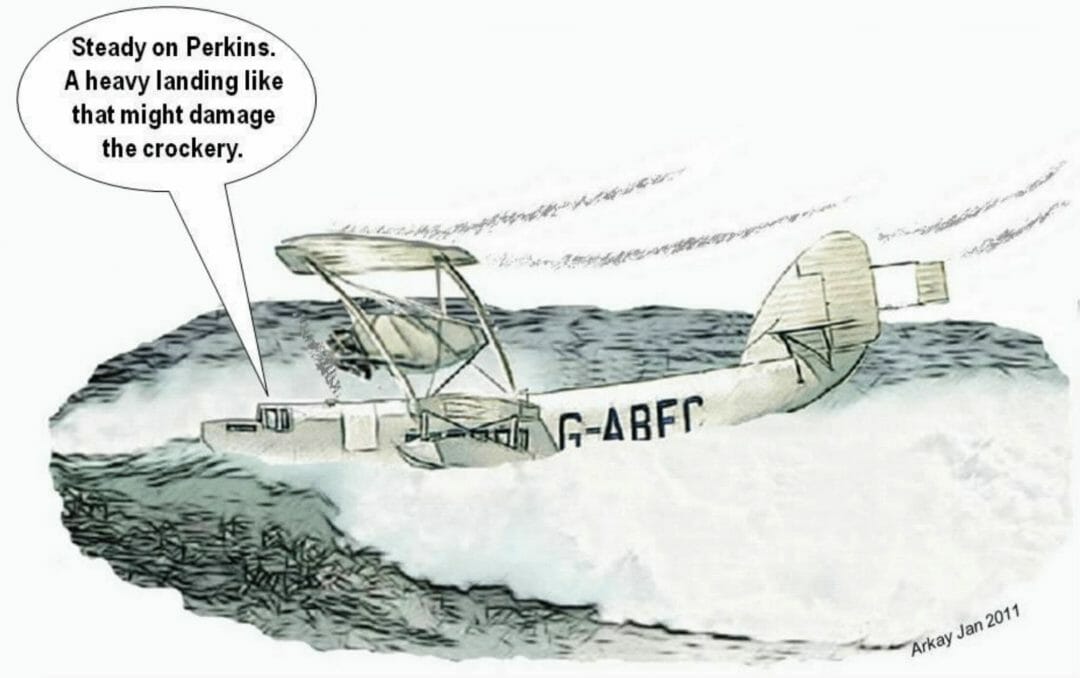 In the second cartoon in figure 2 not only is the aircraft, a Calcutta flying boat, distorted and exaggerated but so is the focus of the situation. The safety of the aircraft seems to be placed well below the potential of damaged crockery. Cartooning allows a written addition which I used to focus the concern from the flight deck with a typical British understatement. 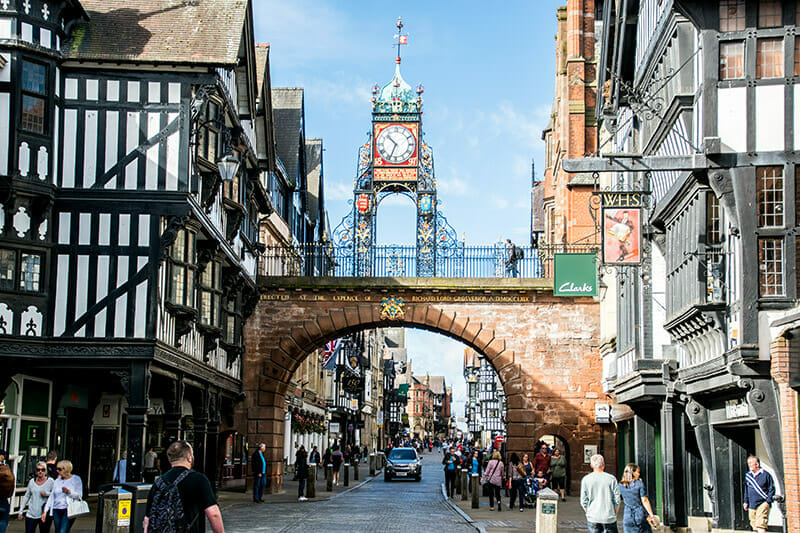 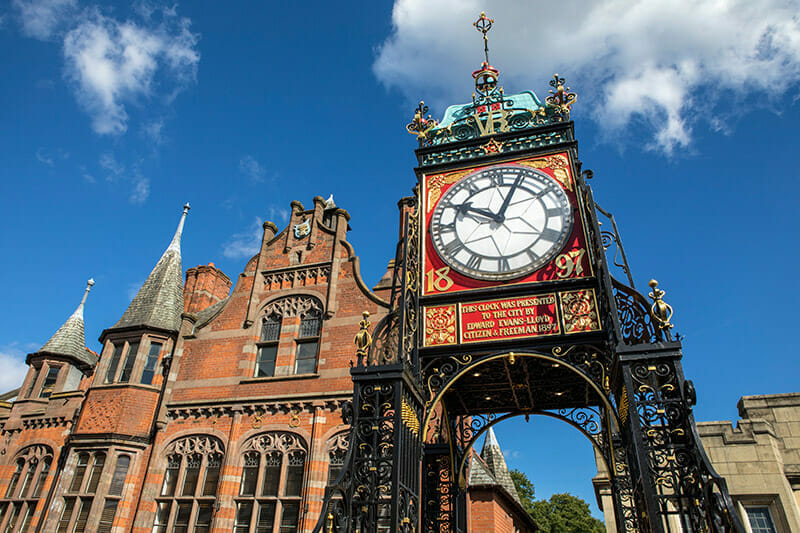 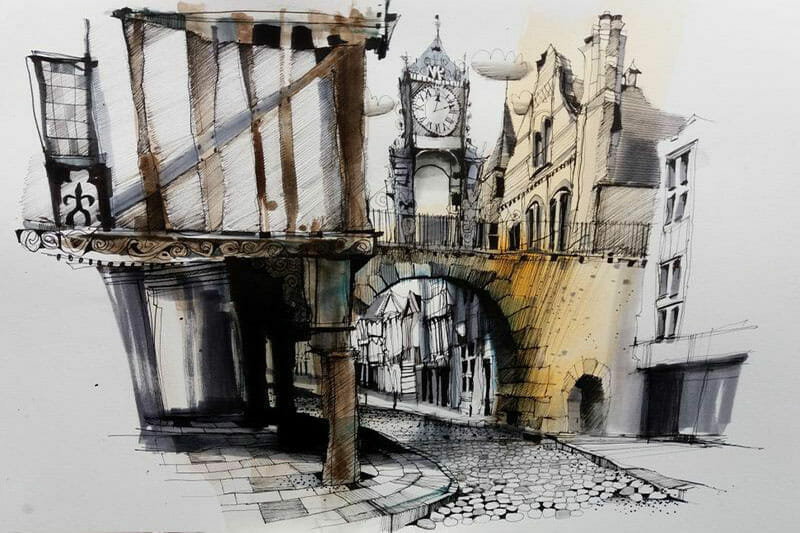 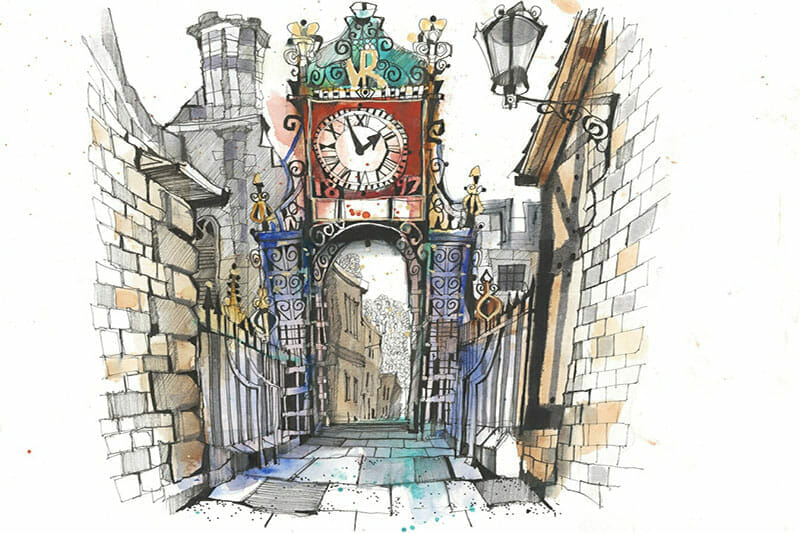 In both cartoons I have shied away from producing a picture of reality. In studying articles about art, I appear to be on the right track. Artists distort and exaggerate subjects as described below.

Source of Information: Ben Austen, “What Caricatures Can Teach Us About Facial Recognition”, 15 July 2015,

An essential skill of the cartoon or caricature artist is the ability to present an image using just a few stokes of the pen and/or brush and yet retain the subject’s form and shape to allow the viewer ready identification and recognition. That too me is a work of art in itself.

Let me move to Ian’s work. Figure 3 shows the reality of the Eastgate Clock in Chester and Ian’s artistic interpretations.

In studying the arch Ian only uses 21 stones in his painting; the real arch has about 40. Ian’s arch stones are much larger than those in the photo. Also, in the painting the upright parts of the arch follow a curved path whereas those in the photo are positioned vertically. The curved approach offers a caricature of the arch. Ian’s representation of the arch is also displayed as two-point perspective.

Figure 4 examines the perspective more closely. The vanishing point associated with the building above the left-hand side of the arch and the left-hand pavement is positioned just to the right of the picture. However, the perspective lines associated with the stones forming the archway seem to a degree to be undisciplined in that they lack a common vanishing point. This slight violation of the rules of perspective adds to the character of the portrayed arch

A prominent feature of the scene is the ornate clock shown in figure 5. Ian again portrays the feature in caricature form, particularly the clock face which is very much distorted, thereby offering a whimsical and comical portrayal. 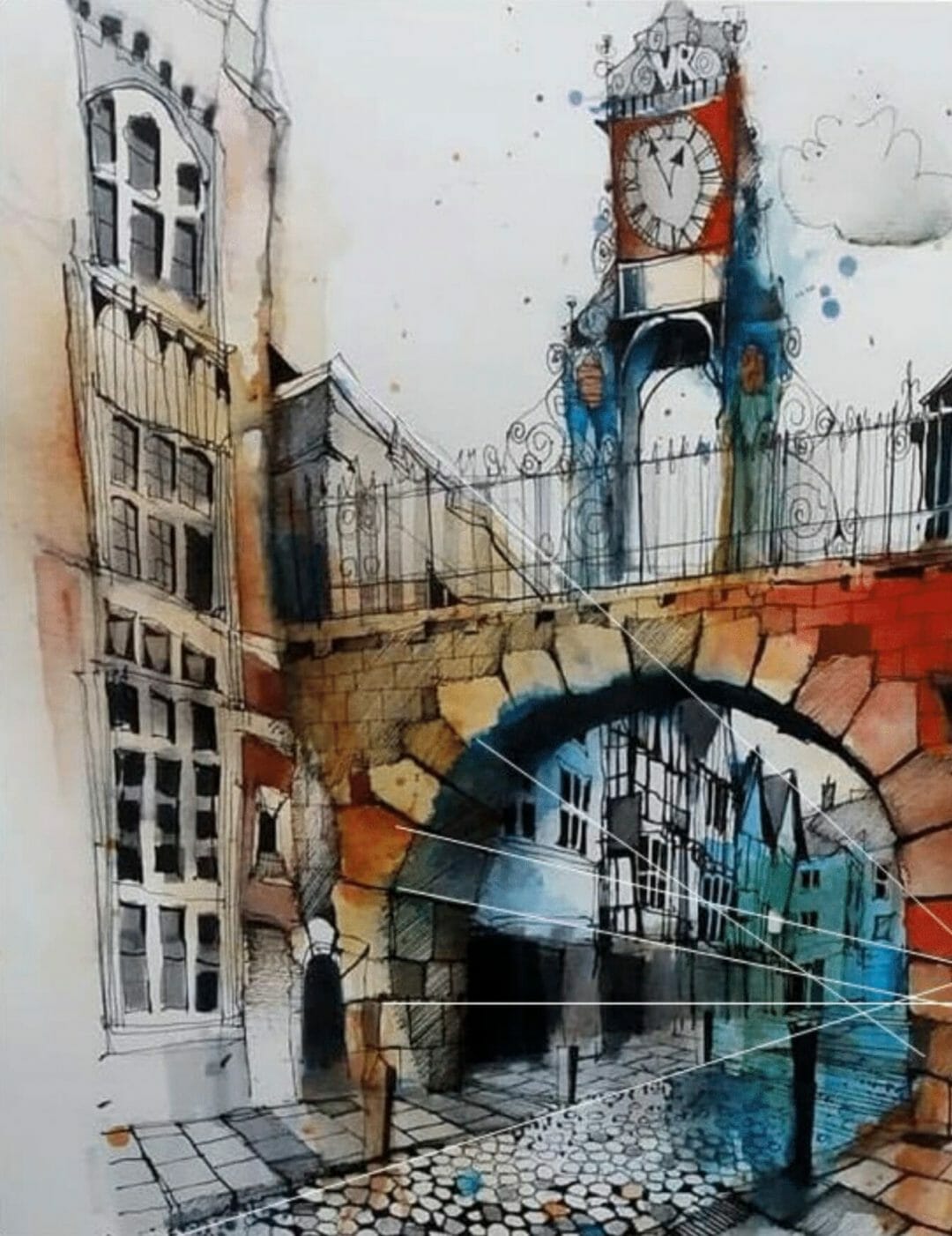 The railings also form an important feature. They are portrayed as larger than reality and portrayed as just being there. The accompanying ornate wrought iron work is simplified to give a minimal level of impression of the presence of iron work.

An embellishment used by Ian is the use of colour. The photo of the Eastgate Clock shows the sandy colour of the arch. In the painting shown in the centre of the above figure Ian adds vivid reds complemented by paler ochre colours with some blue highlights. Shades of blue are featured under and to the rear of the arch which help make the arch more dominant. In figure 5 the colours portrayed in the painted clock offer an impressionist approach and ensure a prominent portrayal of the clock. 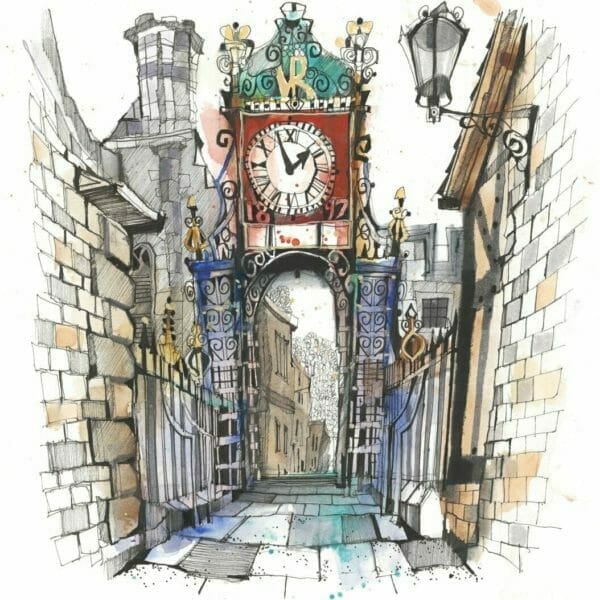 Basically, I view that my modest cartooning efforts follow the basic artistic approach where subjects are distorted and exaggerated and not to try and reproduce reality. Embellishments are necessary to add interest to a painting.

Ian’s work applies a far more sophisticated understanding of the application of distortion, exaggeration and embellishments. His use of vibrant colours to make a feature more prominent and dominant is very effective. I have yet to apply such knowledge.

Thus, I view I have a basic understanding of an approach such as Ian’s. There’s hope for me yet!

Whether you’re brand new to urban sketching or a confident artist, our engaging, video-based online courses teach you step-by-step how to go from blank page, to capturing the bustle and beauty of the world around you, in the unique and fashionable style that is urban sketching.